Cornelius Pöpel is Professor for sound in media at Ansbach University of Applied Sciences in Germany. He received a Doctorate in Music from the University of Birmingham on Audio-Signal-Driven Sound Synthesis in 2011. He has studied viola with Jürgen Kussmaul and Hatto Beyerle at the Music Universities in Düsseldorf and Hannover, Germany as well as audio design with Wolfgang Heiniger at the Music Academy Basel, Switzerland. 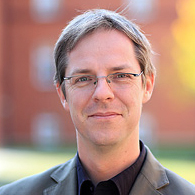 As orchestra musician he performed internationally with conductors like Claudio Abbado, Peter Eötvös or Michael Gielen e.g. in the opening concert of the Salzburg festival in 1992 or the festival Vienna modern. As an audio designer he worked for swiss and german TV and Radio stations, as a sound director for live-electronic music and for orchestras like the Basel Symphony Orchestra or the European Chaos String Quintett. After his position as a research associate at ZKM Karlsruhe (Centre for Art and Media), he was artistic and academic staff member at the Cologne Academy for media arts before joining Ansbach University in 2008. His current research interests lie in human aspects in Media, in perception and cognition of music and in the development and use of computer-based musical instruments.