Lo Bil is a settler-artist based in the Dish with One Spoon Territory, who creates body-based performative experiments to correlate research into process, vulnerability, risk, memory and agency, who is seeking an aesthetics that arises out of sensory experience. 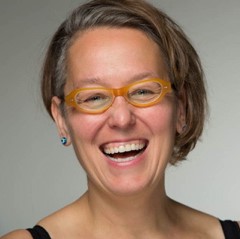 lo finds images through physical improvisations, spoken loops, and material interactions.  She sources questions from an improvisational stream-of-consciousness process that has come from studies in Visual and Performance Art and a rethinking through Pochinko clown, Grotowski-inspired source work, sensory cinema, experimental poetry and contemporary dance forms.  Her performances have been called raw, unrepeatable, amusing, transparent, and involve a feedback loop with the audience.

Lo’s methodology involves expanding aspects of practice across short-term projects to increase performance-making potential within economic constraints. Each project answers a question that emerges from the last process-performance. 2017 solo performances include Duration & Dialogue Festival, Rhubarb Festival, Flowchart at Dancemakers, Guelph Short and Sweet/Kazoo Festival, PS: We Are All Here (Toronto Dance Community Love-in), One Night Only in Glasgow as part of the UK Live Art Development Agency’s DIY Program and an inter-relational experiment titled, “Procedures: Audience as Knife” as part of HATCH at Harbourfront.

2016 performances included AGO’s First Thursdays, as part of NO OBJECT Collective of which lo is a founding member and solo work at Summerworks Festival where she won the FADO Live Art Award; as well as solo work at Panoply Lab in NYC; in Montreal, for Victoria Stanton through Dare-Dare, WIVES Assemblee for Studio 303 Curator-in-Residence Program, and Words and [__] Words a durational conference by School of Making Thinking. In 2015, lo showed work at Month of Performance Art-Berlin and ITINERANT Performance Art Festival NYC.  In 2014, she created two new performances for a 25-hour festival at the District of Collumbia Arts Centre in Washington and performed “The Clearing” an 11-hour durational work at 7a*11d International Festival of Performance Art wherein she used her own archive of 30 years of writing and note taking as sculptural material.

Lo is currently an Interdisciplinary Masters student at York researching how technological methodologies and political theory might produce new ways of working in body-based performance art-making processes.  She has an Honours B.A. from The University of Toronto in Cinema, Philosophy and Semiotics.  She has been engaging in practices with artists from around the world for the past 15 years.